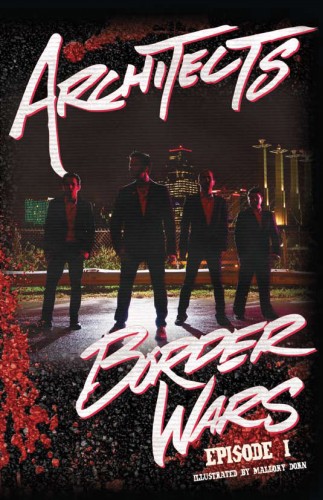 Border Wars by The Architects, is, or will be, a concept album in five parts. Each part will contain both a comic book and a record, intended to be experienced simultaneously.

Volume 1, the comic, written by Brandon Phillips, lead singer for The Architects, and magnificently illustrated by Mallory Dorn, is the start of a dense, dark and bloody story of life along the Texas/Mexico border, full of interesting characters, including but not limited to: an inmate on death row who shares hints of a complicated past; a duplicitous, murderous reality-tv-star sheriff; a mega-church pastor and his estranged son; and a mysterious girl whose appearance – naked and half-dead – adds fuel to the narrative.

Volume 1, the record by the Architects, illustrates the same story in a different but complimentary and congruent way. The bruised jewel-tones and thick black lines of the comic are echoed by the bright brash punkabilly guitars; the lyrics allow the listener to get an idea of the character of the broad outer world of the comic while also illuminating the inner world of individual characters.

Also, while we here at NTSIB vigorously resist falling into the “sounds like” trap, I have to tell you, it would be reasonable to make comparisons to both Born in the USA-era Springsteen and early ’90s Social Distortion. The world may be different – this place The Architects and Mallory Dorn have brought to life is Darlington County if Darlington County was run by Walter White and Jesse was driving around listening to Ball and Chain – but the raw propulsive power and deft compression of a big, complicated story into only a few lines are the same.

Below is Volume 1, in its entirety. All of the songs are strong, but I particularly enjoy Lucky, Heartbreaker and I Chose Wrong. And by “enjoy” I mean “would happily listen to them on a little loop multiple times in a row.”


Volume 2 is currently in pre-order. Meanwhile, The Architects are hitting the road. New York, your show is November 19th at the Knitting Factory; everyone else, check their dates and make your plans accordingly.