Home » feature » Infantree: I had a rough time breaking down my doors.

Infantree: I had a rough time breaking down my doors. 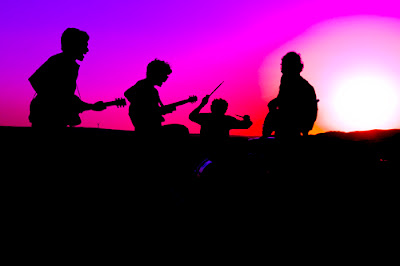 I could make supposedly witty remarks about how Infantree is an appropriate name because these guys are twelve years old if they’re a day, but that would belie the maturity of their sound and the confidence of their fully-realized songs. While they’re only a few years out of high school, three of this four-man band from southern California have been playing and writing together since elementary school, and the experience shows in their music.

Their sound encompasses influences from jazz to folk to Spanish classical to rock to blues to… they’re eclectic, let’s put it that way. And they have the skill to translate these influences into whole music instead of the mish-mash such eclecticism could otherwise engender.

Apparently, they also have the skill to make my write like some pretentious magazine reviewer, so why don’t you just listen to them instead. Here’s “Euphemism” from their EP Food for Thought.

Their full-length album, Would Work – produced by Niko Bolas (Neil Young, Warren Zevon) – will be out on September 14.