Home » uncategorized » Obsess Much? : The Black Keys, All times are now

Obsess Much? : The Black Keys, All times are now 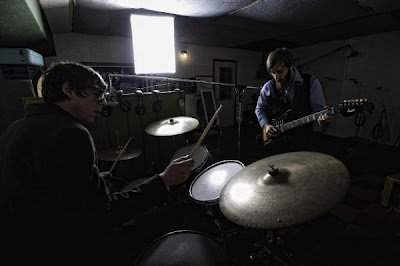 I had already planned to obsess some more about the Black Keys, and specifically about how the biggest reason I love Dan Auerbach is because he is a music sponge, today when I learned that NPR Music had posted the new Black Keys album Brothers in their “First Listen” feature.

Let me just get this out of the way now: I am in love with this album. Every song hits me in a way that gets me excited. These 55 minutes of music go by far too fast.

(And if you put on your headphones and turn “Howlin’ For You” up loud enough, it sounds like the walls are coming down around you. Spectacular.)

I’m going to start off by apologizing to Patrick Carney for excluding him so often when I talk about the music of the Black Keys. The Black Keys would not be the Black Keys without Carney – you can’t just Spinal Tap another drummer into his place. He is a monster of a hitter and one of the few drummers who makes me sit up and take notice (I may be nursing dreams about an Ohio supergroup with dual drummers: Carney and Sam Meister of mr. Gnome. I haven’t even thought about who else I’d put in that lineup because I can’t get past how mind-blowingly awesome it would be to have Carney and Meister together). But I think it’s safe to say that much of the Black Keys sound can be contributed to Auerbach.

It’s no secret that Auerbach is heavily influenced by the blues – especially the late Junior Kimbrough, the Black Keys’ Chulahoma album being a love letter to the man who set Auerbach on the path that took him to where he is today – and Brothers is drenched with soul. Both of these genres can feel like, and be treated as, relics, but they have never felt dated when filtered through Auerbach’s lens. One reason for this is that he is not precious about what he creates. The Keys are known for being quick and dirty about recording their albums, getting the heart that comes out of an unpolished, from-the-gut performance, resisting the temptation to slick things up to make them perfect (a move which can easily result in soulless noise), creating a base from which their music can change and evolve.

Another reason goes back to what I wrote earlier about Auerbach being a music sponge. Taking into consideration all the music the Black Keys have created, all the music they have produced for others and Auerbach’s solo work, it is obvious that Auerbach listens to everything, from all genres and all eras. And it seems that, where music is concerned for Auerbach, all times are now. Music created even before the dawn of recording is just as current as the most recent mp3 posted to the internet. For Auerbach, music is alive. All of it. Living and breathing just as strongly now as when the first beat was thumped out or the first string was plucked. The blood still flows, and Auerbach adds a few drops of his own red to this gushing stream.

Tagged  link, Obsess Much?, The Black Keys.
Bookmark the permalink.
Logging In...