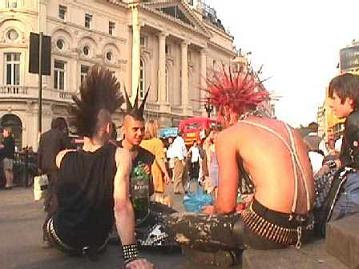 For better or for worse, music has become inextricably linked to identity and image. Bands in certain genres are automatically tagged with certain traits by listeners. A “sound” may be attributed to a band based on their geographical location – the Seattle sound, the Philly sound, etc. And skimming through a few band pages at MySpace, one will find it easy to determine the sound of many bands solely from the art and images displayed (tip: if you display individual, name-tagged images of each of your band members accompanied by a photo of the band in a “fun” pose together, you will probably not be mistaken for a particularly experimental or progressive act).

This image tagging trickles down to the listeners and is sometimes forcibly taken up by listeners. Kids seeking their identities will lock themselves in their rooms with music for hours and will often emerge outfitted in the trappings of the music they have found the most relatable to their life or to the life they want to have. Cliques are formed. The punk kids won’t hang out with the metal kids. The hip-hop kids taunt the country kids. The emo kids don’t even come out of their rooms. The outer trappings can become a comfort when these kids begin making forays out into the world. In a sea of unfamiliar faces, another person with green hair or a cowboy hat can be an oasis. Friendships are formed over the fact that two people love one band and can’t stand another band favored by their peers.

As they mature and enter into romantic relationships, people woo each other with mixtapes. A song that a couple has danced together to becomes “our song” and will forever bring memories of that relationship, even long after the relationship ends. Couples move in together, and their record collections meld together. I’ve often said the hardest part of my own divorce was splitting up our tapes and CDs – we sat on the floor with pen, paper and stacks of CDs for a couple of hours, often bargaining with each other to gain sole ownership of certain albums. And everyone has heard stories of a significant other stealing an entire music collection in a messy break-up.

I began thinking about all of this while in conversation with a friend about fear. While I have grown more self-confident as I’ve grown older, I’ve also found it more daunting to go out into the world. I reasoned that part of the problem for me was a drastic decrease in the displays of these outer trappings for people my age. I officially entered my late 30s earlier this month, but unlike so many others in their late 30s/early 40s, I am not looking to settle down and blend into the suburbs with 2.5 kids, a trusty canine companion, a sport utility vehicle, a mortgage and more khaki trousers than any individual should ever own. I still have more black in my wardrobe than any other color. I like platform shoes and big, silver rings. I have a bleached streak in my hair, a visible tattoo and calloused fingertips on my left hand from playing guitar. I don’t see anyone else who looks remotely like me on my semi-suburban street. I don’t see anyone who looks like me at the grocery store unless I go at a certain time of night, and even then, the people I can identify as a part of my tribe are usually a good ten years younger than me. As a result, I feel as much an outsider as I did in high school.

This, I believe, is part of the reason I love music so much and why I become fixated on certain artists. Musicians still display the trappings, the signifiers long after people in the “normal” world have cut their hair and thrown away their band T-shirts (and, of course, many of those musicians are the very reason some of those trappings ever became symbols of identity). I can look at Dan Auerbach in his railroad jacket or Greg Dulli in his all-black wardrobe and see that they are a part of my tribe. Even if we share nothing more than similar taste in music (though, as we’re all from Ohio, we likely share a little more than that), that’s still much more than I share with most people I encounter in “meatspace” on a daily basis.

Music is still one of the most important things in my life, it still drives a large part of who I am. And, for me, music is still a refuge.