Home » feature » Fight for Your Right: I Need That Record

Fight for Your Right: I Need That Record

Record Store Day was a great success for all involved, it seems. It certainly was for NTSIB, and the store where we celebrated, Music Saves in Cleveland, broke their record from last year. It really did feel like a Christmas for music geeks, and I was in high spirits all day as I spun my new vinyl.

For the curious, I picked up: the Black Keys “Tighten Up”/”Howlin’ for You” 12″ – which was obtained without bloodshed – the TV on the Radio Dear Science LP, the Joe Strummer and the Mescaleros “Global A Go-Go” LP and the I Need That Record! DVD. I almost didn’t pick up I Need That Record!, but after watching it, I was very glad that I did.

I Need That Record! is a documentary by Brendan Toller on, as the subtitle states, “the death (and possible survival) of the indpendent record store”. If you are a music geek, you know that record stores do still exist. If you’ve been reading NTSIB, you know they still exist. But some people don’t even realize there are still actual, physical stores out there that do indeed sell vinyl, as well as CDs, etc. Even some of the people interviewed for this doc, like legendary noise-composer Glenn Branca, were unsure of the continued existence of record stores, illustrating the very problem this doc investigates.

For many people who follow music – or even for those who follow the plight of independent businesses in general – much of the ground covered in Record will not be news, but there will still be pieces of information that will surprise the viewer. And the treatment of the subject is fairly even-handed, spreading the responsibility among major labels, big box stores, internet downloads and consumers. But the big draw of this doc is the passion of the people involved with independent record stores, from the music makers to the shop owners to, most importantly, the music buyers. The stand-out moment of Record is when a loyal customer of Trash American Style, who gives his name as “John the Bomb”, goes on an impassioned rant about what music and the record store mean to him.

I was choked up by it, anyway.

If you’re less of an emotional twit than I am, you might be lured by the appearance of a number of serious names, such as Branca, Ian Mackaye, Thurston Moore, Legs McNeil, the legendary Noam Chomsky, the fascinating Lenny Kaye or the great Mike Watt. For readers in Cleveland, there is a special thrill in seeing Melanie and Kevin from Music Saves show up. 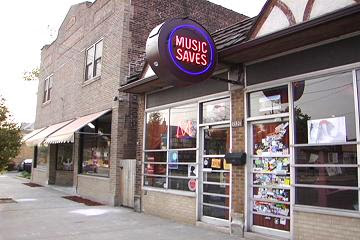 I am very happy to have this great work in my hand in tangible form (because I’m one of those tactile junkies who loves vinyl as much for the ability to hold the cover in my hands and pore over the liner notes as I listen to the record as much as for the sound quality), but for those solely interested in the content, Pitchfork is streaming the entire documentary in their One Week Only spotlight. So there’s no reason not to watch this genuinely moving and, I’ll just say it, important documentary.

I’ll be your best friend forever.

Pitchfork One Week Only: I Need That Record!

I Need That Record! Official Site